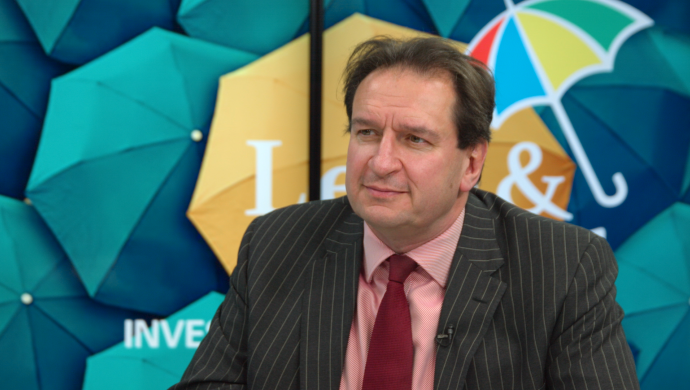 WATCH LATER
Martin Reeves, Head of Global High Yield at Legal & General Investment Management, discusses the current performance of the global high yield market, what impact rising rates will have on the high yield environment, the fallen angels of the market and how this all translates into the portfolio.

MARTIN REEVES: Yes, morning Jenny, thanks a lot for having me along. There’s been a tremendous change in the global high yield market. I’ve been doing this now for over my life, about 25 years, and I guess that dates me saying that. I think one of the big changes that occurred was after 2008 when the global high yield market almost tripled in size. Moved from about $700 billion and is probably closer to about $2 trillion all in. The biggest change has actually come in the growth of European high yield and in emerging markets high yield. After the financial crisis there was not so much liquidity available, the banks were withdrawing, and the high yield bond market came in to fill that space.

PRESENTER: Well there has been a structural change in what the high yield market is financing, what are we looking at there?

MARTIN REEVES: Yes, I think many people are wary of the high yield market. I mean I’ve been investing in it for 25 years. I have mine, my wife’s and my children’s money in the funds that I manage, so I obviously feel comfortable with it. I think one of the changes that’s actually occurred is it’s become stronger, stronger financially. There’s a greater amount of what we call BB paper in the market, and a smaller amount of what we call CCC paper. And BB paper defaults, but defaults nowhere near as much as CCC paper. So the overall credit quality in the high yield bond market has actually increased quite a lot over the last 10 years, and that I think is important considering some of the challenges we’re going to be facing over the couple of years.

PRESENTER: Well high yield valuations have reached some eye watering levels, what would you say to that?

MARTIN REEVES: Well I would say that when we were first talking about that call was exactly right, but in the last six/eight weeks we’ve actually seen quite a lot of repricing. I guess that’s generally the way the market moves, it doesn’t really wait for anyone but it moves quite suddenly. And so we’ve gone from a situation where the US high yield market was in about the 20th centile, the second decile on valuations. Now it’s moved out towards the 30th and the 40th centile on valuations, and looks as though it’s probably going a bit wider from there. So having been in the situation where not many people have been attracted to it, despite the fundamentals being strong, I think we’ll see more people attracted to it over the next six and 12 months.

PRESENTER: Well we are in a rising rate environment, so what sort of impact do you think this will have on high yield and default rates?

MARTIN REEVES: I think they’re two separate things, and a rising rate environment, which a lot of people have been concerned about for the last 12 months, actually is not that much of an issue for high yield. If rates are rising when growth is good, then actually defaults should stay low. Revenues generally rising, and rising quicker than the cost of interest actually is rising, so that’s important for high yield companies. However rising rates does cause people some concern. But again if we look at returns, high yield’s actually performed a lot better than many other asset classes this year. And one of the reasons is it is a short duration asset class.

So it only has an average life of three or four years; whereas if you go to investment grade, you’re talking about companies which might have eight year average duration in the bonds they issue, or potentially longer than that. So the interest rate sensitivity is a lot lower in high yield. The pull to par, the generation of income, these are key things in high yield. Defaults have been historically low. We might see defaults rise, but as I said structurally the market actually in terms of pure credit quality is in the best place that it’s ever been.

PRESENTER: Yes, well in today’s investment environment, how important is it would you say to have a global approach?

MARTIN REEVES: I think a global approach is, as with any asset class, if you can take a global approach it’s going to work well for you. You’re able to diversify. You’re able to find opportunities across different parts of the world. If you take a global approach you can try and exploit what local investors might be seeing relative to what investors in other markets might be seeing. But by diversifying and getting a good range of macro factors into your portfolio, reducing the correlation amongst names, I think that’s the most attractive part about going global. If we look actually in the last six or eight weeks, to many people’s surprise, the US started off being very weak, Europe was robust; Europe is now very weak and the US is a bit stronger. But during all of this time emerging markets high yield corporate bonds has actually been very strong. And that’s a turnaround from the first half of the year when the opposite was true. So now we’re in a situation where asset classes around the world are moving at different rates and that becomes interesting for the global investor.

MARTIN REEVES: I think there’s a couple of things. When we were setting the team up, we have a very experienced team. When I joined seven-and-a-half years ago we had an average experience of 10 years; now we’re at 16 years. It’s one of the most experienced teams you can find, and actually there’s a few people who, like me, are approaching, having spent half of their life doing that. That means we’ve seen quite a lot. We’ve seen the bad times, and we also know the bad times always lead to good times, no matter how bad it feels. Experience is very important. We also, because we’re global we take a macro approach, so different to a lot of other managers. Though we look at the idiosyncratic, though we look at the company risk, the most important thing is what is going on in the economies, what is going on in the industries, and at this particular moment in time I think that’s going to be very important.

PRESENTER: Well looking globally there’s more rising stars than fallen angels so how do you see this developing and where do you find the opportunities?

MARTIN REEVES: Well again if we were having this conversation three months ago relative to today, it would be a different conversation. So you’re absolutely right, we have more rising stars than fallen angels. But I think if we look forward 12 months that’s going to turn itself around. And we’re probably going through a period when that is turning itself around at this moment and starting to get priced into markets. Now as an investor that actually creates some tremendous opportunities, because we think there’s going to be quite a lot of investment grade bonds, which are going to move down into high yield: fallen angels. Traditionally fallen angels have been attractive. Now you don’t want to buy every single fallen angel, but the high yield market is going to grow bigger because there will be downgrades of investment grade bonds. And with quite a robust structure already within high yield, that becomes an interesting environment.

So I think if we’re having this conversation in 12 months, we will be talking about where we see opportunities in quite highly rated bonds, where there’s been forced selling, and forced selling always creates opportunities. One of the other things that we’d strive to achieve and be aware of at Legal & General Investment Management is an awareness of emotion and behavioural finance. And we always look for structures which create forced selling for investors panicking, and we think this could happen in that BBB market, and when that BBB market becomes BB then I think that will be an attractive opportunity.

PRESENTER: Well finally considering all we’ve discussed today, how does this translate in terms of your portfolio?

MARTIN REEVES: Thank you very much.